Victorian Artists Society 150th Celebrations
'In the Artists Footsteps' Series
With the Victorian Artists Society closed at present due the COVID-19 pandemic, the online newsletters are continuing to celebrate the outstanding contribution of members, past and present, artists and events. The current newsletters are focusing on the important contribution made by the women artists of the Heidelberg School to our society.
This Newsletter features May Vale and her life with words provided by Art Historian Andrew Mackenzie OAM.
'Like Clara Southern and Jane Sutherland, May Vale was a strong fighter for the recognition of the professional standing of women artists, and along with Jane Sutherland, was one of the first women to be elected a member of the Buonarotti Society. This Society started in 1880, and May Vale is recorded as being elected as early as 1883.
May Vale also shared the distinction with Jane Sutherland of being one of the first two women to be elected to the Council of the Victorian Artists Society. This occurred in 1900, and she was again elected a Councillor in 1903–1904.' 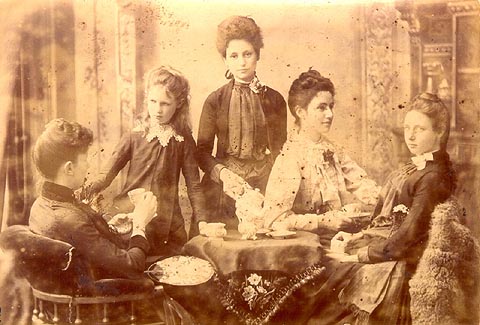 Photograph of May Vale and her four sisters
Left to right - Trissie (Beatrice), Faith, May, Grace, Elsie
Private collection

MAY VALE
Australia 1862–1945
﻿DUCKS (SHOT AT THE MERRI CREEK), 1884
oil on board, 59.5 x 50 cm
Private Collection
This still life work of a pair of dead ducks and the shadow that they cast, was painted at a time that May Vale was a student in the School of Painting at the National Gallery School. Her teacher at this time was George Frederick Folingsby, and the work shows the strong influence of Folingsby's teaching. 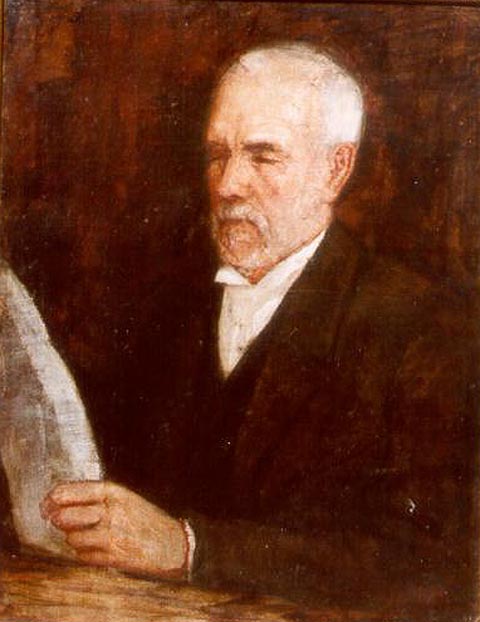 MAY VALE
Australia 1862–1945
PORTRAIT OF DAVID SYME, c. 1892
oil on canvas, 47 x 37 cm
Private Collection
This portrait of David Syme reading a newspaper, was painted on board ship in 1892, while May Vale was on her return voyage from Europe.
David Syme, was the proprietor of The Age newspaper He was born on 2 October 1827 at North Berwick, Scotland and died at his home 'Blythswood' in Kew, Victoria on 14 February 1908.
In his biography in the Australian Dictionary of Biography, Syme is described as 'slim, six feet in height, with deep-set eyes, a thin straight mouth and iron-grey hair and beard, grim and gaunt in appearance, smiling rarely'.
At the time of this portrait, he would have been around sixty-five years of age. 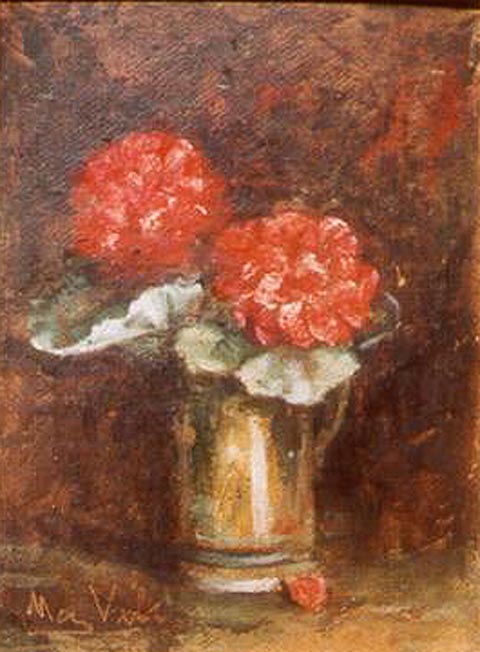 MAY VALE
Australia 1862–1945
GERANIUMS
oil on board, 29.5 x 21.5 cm
Private Collection
May Vale, produced a number of small flower studies in oils, and in this work she has captured the light on the Geraniums and their petals, the brightness of the blooms, and the reflection of the light on the brass vessel in which they stand.. She loved her garden, and in the 1920's, grew many flowers around her hilltop studio and hut, 'The Shack' in Diamond Creek. 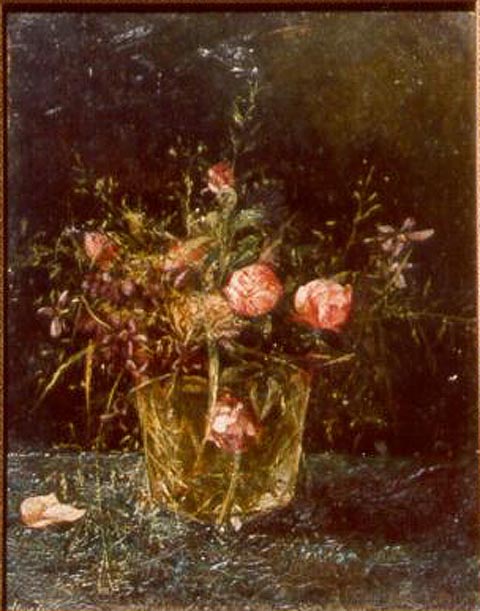 MAY VALE
Australia 1862–1945
﻿
ROSES IN CRYSTAL VASE
oil on board, 29 x 22 cm
Private Collection
In this small oil work, May Vale, exhibits her skill in depicting the translucency of the crystal vase. It is a difficult subject to master, and one that may have been set as a student exercise at the National Gallery School.
﻿Arthur Streeton was one of the few artists who excelled in this area, and painted many works in his later years, of the roses from his garden, in crystal vases. 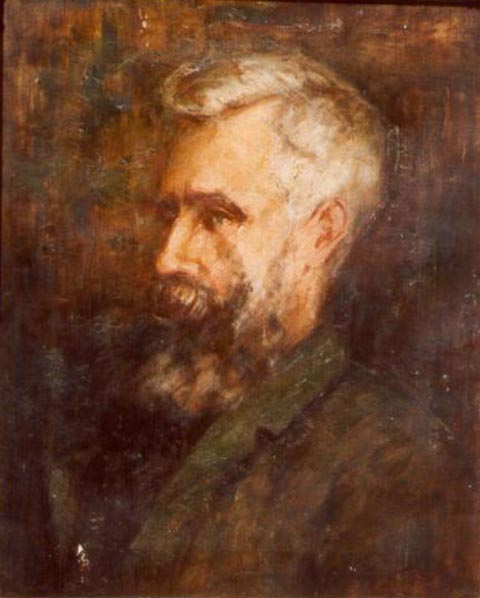 MAY VALE
Australia 1862–1945
PORTRAIT OF THE ARTIST'S FATHER,
WILLIAM MOUNTFORD KINSEY VALE
oil on canvas, 50 x 40cm
Private Collection
William Mountford Kinsey Vale, was born 10 August 1833, and died from Bright's disease at Collingwood on 23 October 1895. He is buried in St. Kilda Cemetery. He had a very successful career in politics, holding the seats of Ballarat West, Collingwood and Fitzroy, at various times of his life.
At his funeral a small black booklet was given to those attending, written by R.R. and re-printed from a Ballarat Paper, October 1895. This was AN APPRECIATION : THE LATE Hon. William M.K.Vale, and it told of Vale's early years in the political arena of Ballarat. Further references to W.M.K.Vale, and his brother, Richard Tayler Vale, who was also a politician in Ballarat West, can be found in The History of Ballarat: From the First Pastoral Settlement to the Present Time by William Bramwell Withers, Ballarat, F.W.Niven, 1887; and in Lucky City: The First Generation at Ballarat, 1851-1901 by Weston Bate, Carlton South, Melbourne University Press, 1978. He is also referred to in all other major histories of Ballarat, as well as early histories of Collingwood.
Vale was also a land speculator, in areas such as Mount Eliza, and Mornington, and lost his fortune in the land boom crash of the early 1890's.
Joy E. Parnaby, in her  Australian Dictionary of Biography entry on W.M.K.Vale, noted that Alfred Deakin, described him as 'handsome, well-featured, with fine eyes and a ringing mellow voice, abounding in energy, voluble, fairly well-read and a strict Puritan in life and ideals, strong in domestic affections…His faults were an egotism which made him envious and suspicious, a biliousness which made him intolerant and vindictive and a vocabulary which made him a master of personal abuse'.
Click HERE to view further artworks of May Vale 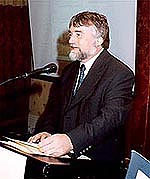